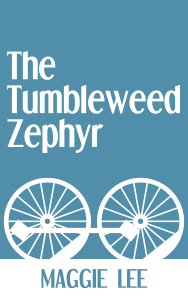 Two brothers, Atticus and Kai, climb aboard the Tumbleweed Zephyr, a transcontinental train headed from New Providence for the wilds of the Western Territories. But what starts as a simple journey by rail soon veers off track, with airship bandits, twists of fate, and wayward sparks of romance. All aboard for this epic new steampunk adventure!

The Tumbleweed Zephyr was originally produced by Pork Filled Productions at 12th Avenue Arts in Seattle, WA, and ran from August 14 – 29, 2015. It was directed by Amy Poisson.

“It’s really just a good time and a great addition to the already fun world. The tone is a wonderful mixture of old west serial and futuristic technologies…Director Amy Poisson has once again helmed a thrilling story in this crazy world and assembled a wonderful ensemble…”
— Jay Irwin, BroadwayWorld Seattle

“Amy Poisson directs this crazy mix of characters and makes the most of all the surprises in this charming and silly steampunk experience that manages to offer a few lessons too.”
— Nancy Worssam, Arts Stage-Seattle Rage

“All aboard The Tumbleweed Zephyr for those in the mood for an amiable steampunk fantasy on the rails…The winning cast attenuates the sometimes enervating narrative curlicues, particularly Lin, who sells the humor and the romance with his mounting exasperation at Cawaling’s impish antics and his cautious pursuit of Ingalls’ courtesan, a dreamer whose desire for a different life lends a touch of poignancy to the trip.”
— Dusty Somers, The Seattle Times